We begin with grandmothers. Isn’t it something else when you think we came out of of our grandmothers- in a very physical way… Her body gave either our father or our mother. You are physically a part of her body. Of course not everybody has a loving relationship with their grandparents or even *has* grandparents they know. Some people become our grandparents because of the air you breathe together or the houses you shared or the streets.

Part of a poem Face by Jean Toomer, it is a sad poem but he wrote it with so much love for the grandmother… loving her face:

Hair—
silver-gray
like streams of stars,
Brows—
recurved canoes
quivered by the ripples blown by pain,
Her eyes—
mist of tears
condensing on the flesh below
.

From: November Cotton Flower
…
Brown eyes that loved without a trace of fear,
Beauty so sudden for that time of year.

All of the poem November Cotton Flower:

Boll-weevil’s coming, and the winter’s cold,
Made cotton-stalks look rusty, seasons old,
And cotton, scarce as any southern snow,
Was vanishing; the branch, so pinched and slow,
Failed in its function as the autumn rake;
Drouth fighting soil had caused the soil to take
All water from the streams; dead birds were found
In wells a hundred feet below the ground—
Such was the season when the flower bloomed.
Old folks were startled, and it soon assumed
Significance. Superstition saw
Something it had never seen before:
Brown eyes that loved without a trace of fear,
Beauty so sudden for that time of year.
.

“Caroling Dusk: an Anthology of Verse by Black Poets.” Edited by Countee Cullen.

brothers,
this big woman
carries much sweetness
in the folds of her flesh.
her hair
is white with wonderful.
she is
rounder than the moon
and far more faithful.
brothers,
who will hold her,
who will find her beautiful
if you do not?

won’t you celebrate with me
what i have shaped into
a kind of life? i had no model.
born in babylon
both nonwhite and woman
what did i see to be except myself?
i made it up
here on the bridge between
starshine and clay,
my own hand holding tight
my other hand; come celebrate
with me that everyday
something has tried to kill me
and has failed.

Lessons from a Mirror

Snow White was nude at her wedding, she’s so white
the gown seemed to disappear when she put it on.

Put me beside her and the proximity is good
for a study of chiaroscuro, not much else.

Her name aggravates me most, as if I need to be told
what’s white and what isn’t.

Judging strictly by appearance there’s a future for me
forever at her heels, a shadow’s constant worship.

Is it fair for me to live that way, unable
to get off the ground?

Turning the tables isn’t fair unless they keep turning.
Then there’s the danger of Russian roulette

and my disadvantage: nothing falls from the sky
to name me.

I am the empty space where the tooth was, that my tongue
rushes to fill because I can’t stand vacancies.

When you look at me,
know that more than white is missing.

About the meaning read this post by Tara Betts: ““Lessons from a Mirror” is from Moss’ third collection. Pyramid of Bone was part of the Callaloo Poetry Series, which published early books by Rita Dove, Brenda Marie Osbey, and Elizabeth Alexander.

“Lessons from a Mirror” is a concise gathering of 10 couplets that articulates the contrast between a woman of color and someone who she will never be, Snow White.

This not only implies a sense of possible servitude but a sense that a shadow, darkness will always be beneath whiteness that

darkness must bow and defer as an underling.

“And it’s not enough.” To say this, recalls how black people have often had to work much

harder to gain a toehold

similar to counterparts of another race, a toehold that has become increasingly more difficult to gain as shown in recent Pew Research Center study about wealth accumulation and loss in the U.S..

and jarring it is to see

USED and NEW– books by Tara Betts at abebooks!

Tune for a Teenage Niece

A moment Captured by a Japanese Painter of the Eighteenth Century Seen in a Moment of the Twentieth Century in a London Gallery.

If you want an easy, fun, interesting, cool book of poetry and you don’t normally read much, this is your book. Together with the Anthology of African American Verse. It’s like reading short Facebook updates.

Throw your hand in and place the dough
Many were cooked over flat pans
Eyes were singed lighting damp wood
Now wear the coal of this heat in your eyes
Raise your arms and dance in it
Red wheat has sprouted during the course of time Night a burning oven
Throw your hand in and place the dough
Lay your virtues on the table
Serve yourself and feed yourself
Who knows when the day will rise, how it will rise
Whoever beheld the daybreak
Will not return to tell

http://www.mptmagazine.com/author/najm-hosain-syed-5469/
“Najm Hosain Syed is the most significant Punjabi writer of post-Partition West Punjabi literature. He was born in 1936 in Batala eastern Punjab. After Partition in 1947, his family had to move to Lahore in Pakistan. He did his masters in English literature from Punjab University and joined Pakistan civil service and retired as Accountant General of Punjab.

He founded the Punjabi Sangat -literary study group- and the Majlis Shah Hussain -a publishing venture- in the early 1970s. During the time he also headed the post-graduate Department of Punjabi in Punjab University. He has authored more than 30 books of poetry, plays and creative non-fiction. “ 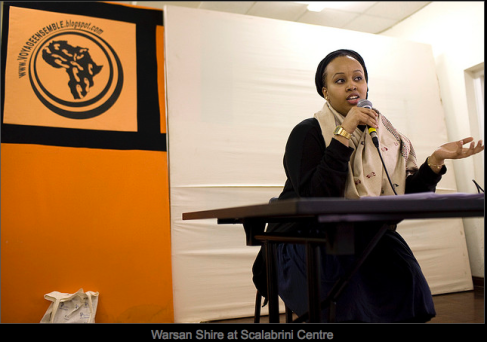 Teaching My Mother to Give Birth by Warsan Shire:

“later that night
i held an atlas in my lap
ran my fingers across the whole world
and whispered
where does it hurt?”