Tiq Milan in NOW Magazine and the NYT.

Black* Transwoman to Black Cis/Transman: An Open Letter/Poem for Trayvon and the Rest of Us

Black* transwoman to black* cis/trans* man. I revere and respect you for living brave in a world that hunts you with hypocritical indignation. I thank you for living in the body I couldn’t and doing it with such swag, intellect, and a vengeance.

As a black* transwoman I want you to know that I never abandoned you or took the easy way out. A war was waged on black* bodies the moment the first slave touched Virginian soil in the 1600′s. So I transitioned from “male” to “female” because I just needed to be in more comfortable battle fatigues.

“KOKUMỌ is an African-American transgender woman and product of Chicago’s South Side. To KOKUMỌ surviving is passé. Therefore, she believes in sanctioning artistic, political, and actual space for other Trans, Gender Non-Conforming, and Intersex (TGI) people of color to thrive in. In accordance to this belief and her name, she created KOKUMỌMEDIA. KOKUMỌMEDIA uses film, music, and literature to create and generate realistic depictions of TGI people of color.”

Like Loading...
Do you let a dream go by because there is so much else to do? So much to cook, take the trash out, sing out loud arias and dance around. And a hot shower makes you forget everything, a luke warm shower makes you want the heat so much that you keep standing in the hope the water gets warmer. It doesn’t. And then you’re too tired or ready to go out.
Kitchenette Building by Gwendolyn Brooks
…
But could a dream send up through onion fumes
Its white and violet, fight with fried potatoes
And yesterday’s garbage ripening in the hall,
Flutter, or sing an aria down these rooms
Even if we were willing to let it in,
Had time to warm it, keep it very clean,
Anticipate a message, let it begin?
We wonder. But not well! not for a minute!
Since Number Five is out of the bathroom now,
We think of lukewarm water, hope to get in it.
.

I Have a Dream

More black poets to read through this link.

More about Pat Parker at the University of Minnesota’s Voices From the Gaps
Women Writers and Artists of Color.

“Our best strategy for survival is adding new revenues streams like food and drink – which means a larger space.
We’ve picked out a great spot on Church Street that would allow us to be a bookstore & coffee shop during the day and a bar at night.
It is wheelchair accessible, with an accessible washroom.

It has a cute patio, a small space for performances and walls for art.

We will be a space where everyone feels welcome, sexy and celebrated.

We will be a queer-owned, indie place on Church Street. We will amplify the love, creativity, sexuality, diversity & liberation that Glad Day Bookshop is known for.”

Bird, buttermilk bird—
smack, booze and bitches
I am Bird
baddest night dreamer
on sax in the ornithology-world
I can fly–higher, high, higher
I’m a black man;
I am; I’m a black man—

Read more about this poem and jazz poetry here.

Because sometimes you can’t get a woman out of your mind. Not even by watching Buffy. Or The Good Wife. This poem especially the last line, shows so much tenderness and knowing…

Rosa Gutman Jasny “produced much of their work in Eastern Europe […] also found their way to New York at various stages in their lives. The lives of several women writers were spent in a perpetual state of wandering…”
http://jwa.org/encyclopedia/article/yiddish-womens-poetry

The faraway moon, has she already heard
That any minute now
She’s to become a world by herself?
No longer lotus flower, tender and bemused —
Just an ordinary drab world.

Today she shows us half her face,
drawn and pale.
That blond capricious moon —
What might she not do from rage?

Turn swiftly to her lords on high,
And scatter all dreams since time began,
Like dust into outer space?

Poem by Rosa Gutman Jasny and translated from Yiddish to English by Etta Blum.

To fling my arms wide
In some place of the sun,
To whirl and to dance
Till the white day is done.
Then rest at cool evening
Beneath a tall tree
While dark night comes on gently,
…Dark like me,—
That is my dream!

To fling my arms wide
In the face of the sun,
Dance! whirl! whirl!
Till the quick day is done.
Rest at pale evening. …
A talk, slim tree. …
Night coming tenderly
… Black like me.

I shall hate you
Like a dart of singing steel
Shot through still air
At even-tide,
Or solemnly
As pines are sober
When they stand etched
Against the sky.
Hating you shall be a game
Played with cool hands
And slim fingers.
Your heart will yearn
For the lonely splendor
Of the pine tree
While rekindled fires
In my eyes
Shall wound you like swift arrows.
Memory will lay its hands
Upon your breast
And you will understand
My hatred. 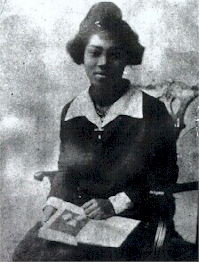 Brown Baby Cobina, with his large black velvet eyes,
His little coos of ecstacies, his gurgling of surprise,
With brass bells on his ankles, that laugh where’er he goes,
It’s so rare for bells to tinkle, above brown dimpled toes.

Brown Baby Cobina is so precious that we fear
Something might come and steal him, when we grown-ups are not near;
So we tied bells on his ankles, and kissed on them this charm —
” Bells, guard our Baby Cobina from all devils and all harm. ”

From: “Caroling Dusk: an Anthology of Verse by Black Poets.” Edited by Countee Cullen.