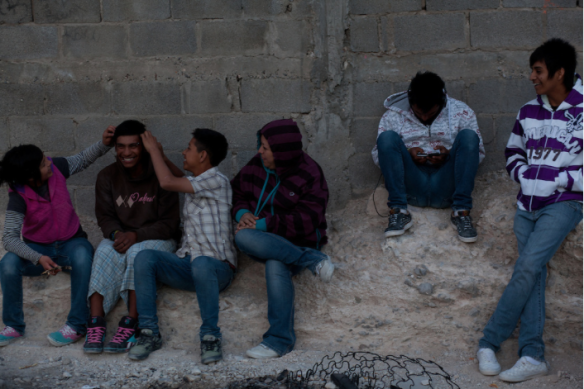 2. There are apartments that feel like they are by the sea, but out the window there is only freeway.

3. The geraniums always wilt either from heat or pollution.

4. El Canelo is the red-headed Mexican boxer that only speaks Spanish.

7. The tortilla border has shanties on one side and trailers on the other.

8. Some call them Fronchis because their license plates read: Fron-Chi for Frontera Chihuahua. Some just call them fresas.

9. Some summers, roaches cross the street and travel home to home like people.

10. Campestre, Anapra, Chavena, Anahuac, Flores Magon, and Independencia are only some of the neighborhoods in Ciudad Juarez.

11. Some streets are lined in wires because it’s so easy to steal electricity.

13. Some days saliva evaporates from the tongue.

14. The river has become the only blue vein left pulsing on the map.

An interview with Natalie Scentres-Zapico is done on Blue Mesa Review here!

a flier in my hand—

a seventeen-year-old girl I knew

her picture splotched with toner.

I let the paper fly again. I know

From “In a Dust Storm”

Photo caption: “Youth hang out in the Diaz Ordaz colonia, one of the poorest neighborhoods of Ciudad Juarez. The group hangs out out a lookout above the neighborhood to see if outside gangs are coming to attack or rob them, after they had recieved death threats and a series of violent exchanges between neighborhoods left them nervous.”

Quiet around the point; ducks;
up down birches
helicopter

The summer river;
Although there is a bridge, my horse
goes through the water