The Story of Crow.

(This poem starts with a daughter so precious that her parents did not want to lose her, ao they protected her and even though many men wanted her hand in marriage, they said she was too good for them. They all waited, I imagine, for the right man. She is referred to as ‘that girl.’)

Crow wanted to be born— he wants to make the world!

So he made himself into a pine needle.
A slave always brings water to that girl and one time he gets water
.   with a pine needle in it.
She turns it down— make him get freshwater.
Again he brings it. Again a pine needle is there.
Four times he brings water and each time it’s there.
Finally she just give up— She spit that pine needle out and drink the
.   water.
But it blew into her mouth and she swallowed it.
Soon the girl is pregnant.

That baby starts to grow fast.
That girl’s father had the sun, moon, stars, daylight hanging in his
.   house.
He’s the only one that has them.
The world was all dark, all the time.
The child begged for them to play with.

Finally, the father gives his grandchild the sun to play with.
He rolls it around, plays with it, laughs, has lots of fun.
Then he rolls it to the door and out it goes!
“Oh!” he cries. He just pretends.
He cries because that sun is lost.

“Give me the moon to play with.”

They say no at first— like now, if a baby asks for the sun or moon you
.   say,
“That’s your grandfather’s fire.”

Finally, they gave it to him.

One by one they gave him the sun, moon, stars, daylight—
He loses them all.

“Where does she get the child from? He loses everything!”
That’s what her father says.

Then Crow disappears.
He has to things with him in the box.
He walks around— comes to a river.
Lots of animals there— fox, wolf, wolverine, mink, rabbit.
Everybody’s fishing…
That time animals all talk like people talk now—
The world is dark.

“Give me fish,” Crow says.
No one pay any attention.
“Give me fish or I’ll bring daylight!”
They laugh at him.

He’s holding a box… starts to open it and lets one ray out.
Then they pay attention!
He opens that books a bit more—they are scared!
Finally he opens that daylight box and threw it out.
Those animals scatter!
They hide in the bush and turn into animals like now.
Then the sun, moon, stars, and daylight come out.

“Go to the skies,” Crow says.
“Now no man owns it— it will be for everybody.”

He’s right, what he says that Crow.

After Crow made the world, he saw that sea lion owned the only island
. in the world.
The rest was water— he’s the only one with land.
The whole place was ocean!
Crawl rests on a piece of log— he’s tired.
He sees see lion with that little island just for himself.
He wants some land to so he stole that sea lion’s kid.

“Give me back that kid!” said sea lion.

“Give me beach, some sand,” says Crow.

So sea lion gave him sand.
Crow threw that sand around the world.
“Be World,” he told it. And it became the world.

After that, he walks around, flies around all alone.
He’s tired— he’s lonely— he needs people.
He took poplar tree bark. You know how it’s thick?
He carved it and then he breathed into i.

“Live!” he said, and he made a person.
He made Crow and Wolf to too.
At first they can’t talk to each other—
Crow man and woman are shy with each other— look away.
Wolf the same way too.

“This is no good,” he said. So we change that.
He made Crow man sit with Wolf woman.
And he made Wolf Man sit with Crow woman.
So Crow must marry Wolf and Wolf must marry Crow.

“You tell what you know.
The way I tell stories is what I know.”

As told by Angela Sidney in “Life Lived Like a Story: Life Stories of Three Yukon Native Elders.” By Julie Cruikshank, p. 42.

Start of story:
“One time there was a girl whose daddy is a very high man.
They kept her in her bedroom all the time—
Men try to marry her all the time, but they say no, she’s too good.” 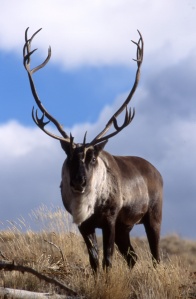 When lake froze in winter,
When Caribou came,
It was just like horses, same.
You could hear their feet making noise,
Making noise [imitates hoofs on ice].
Lots of caribou covered up these hills.

I want to talk about this story,
old people tell this story.

Everybody felt bad: he was gone.
His wife was left alone.

Right in the middle of the lake, they heard caribou singing his song.
People don’t know what to do —
They tried to get him. 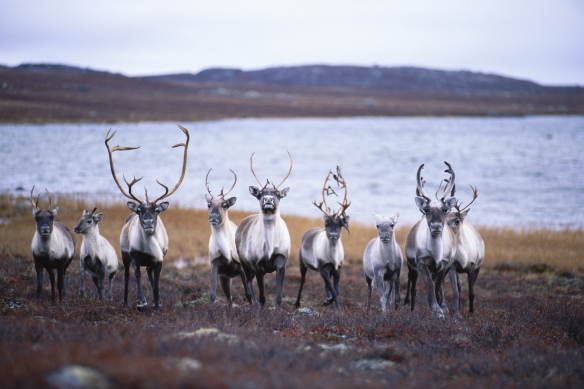 They’ve got bow and arrow, that’s all — they have no gun yet.
It was a long time ago, I guess.
They heard that man’s song.
I think it was wintertime.
Wintertime.

That caribou just lay down in the middle of that ice.

One man told them he was going to do it.
Then he sneaked in. [She shows how he wrestled with the caribou and held it down.]

The caribou spoke:
‘You smell,” he told people.

Well that man knew how to talk to caribou.
“What about your kids,” they asked him.
“Your kids are crying for you,” his own brother told him.
“What’s wrong with you?”

He couldn’t help it.
So they brought him. They brought him home.
They took him home!
I guess his wife is glad: he’s got kids too!
His wife came, and his kids.
He held his kids’ hands, but for his wife, nothing.
He doesn’t know her yet.

Well, they took him back.
They told him.
Then they watched him.
They made a camp for it [away from the human camp].

Somebody watched him there.
He wanted to go!
He doesn’t eat their food — he eats only willows.
You know what that means!
But they kept him the other side of the fire.

Then he came back to person.
But he can’t hunt caribou anymore.

This was way before my time, but I saw lots of caribou.
they came back, caribou.
All this mountain was covered by caribou.
Used to be we had caribou not too long ago when my kids were growing up.

But they didn’t come back. How come?
That man came back to person.
Then he knew where moose are, where caribou are.
He tells them, but he can’t hunt them.

That’s the last time caribou came this way.
Since then nothing.

After Skookum Jim found gold everything changed.
White people came to this country.
White people learned everything from Indians.
Now they want the whole thing, the land!
I’ve got 64 grandchildren in this Yukon.
I worry about them, what’s going to happen?
White people, where’s their grandpa? Their grandma?
Indians should have their own land
To be continued